Lifelong learning and development
in robots and humans 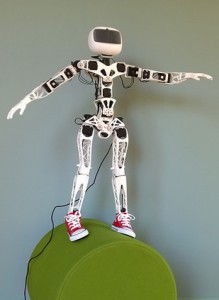 The Flowers project-team, at Inria and Ensta ParisTech, studies mechanisms that can allow robots and humans to acquire autonomously and cumulatively repertoires of novel skills over extended periods of time.

This includes mechanisms for learning by self-exploration, as well as learning through interaction with peers, for the acquisition of both sensorimotor and social skills.  Sensorimotor skills include locomotion, affordance learning, active manipulation. Interactive skills include grounded language use and understanding, adaptive interaction protocols, and human-robot collaboration.

Our approach is organized along two strands of research:

Our project-team, headed by Pierre-Yves Oudeyer (Inria) and co-started with David Filliat (Ensta ParisTech Cognitive Robotics Group), focuses in particular on the study of developmental mechanisms that guide efficient open-ended learning of novel skills in large real world environments. In particular, we study:

The FLOWERS project-team is located on two sites: Inria Bordeaux Sud-Ouest and ENSTA-Paristech in Paris.

In this project, in collaboration with cognitive neuroscientist J. Gottlieb (Univ. Columbia, NY, US) and developmental psychologist C. Kidd (Univ. Rochester, US), we target to construct a comprehensive theory that defines curiosity in the context of quantitative models of learning and decision making and probes its neural mechanisms. We are looking for outstanding postdoc applications.

Link to information about the Poppy humanoid robot : Poppy Project web site. Poppy is an open-source 3D printed robotic platform designed by the Flowers team. Poppy Humanoid robot was initially built to study the impact of the body on sensorimotor development and cognition: it makes it possible to really consider the body as an experimental variable. See article at Humanoids 2013 conference. It then evolved into an open platform for interdisciplinary invention, building and programming of robots, used in science, art and education.