HomeActive learning of motor and interactive skills in robots

Active learning of motor and interactive skills in robots 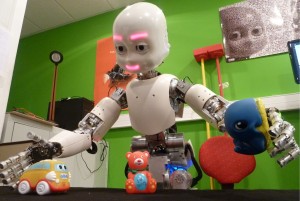 In particular, we study mechanism of active learning which can drive a robot to acquire continuously novel sensorimotor and cognitive skills by ordering autonomously its own learning experiences from simple to progressively more complex, i.e. self-generating its own adapted learning curriculum.

As detailed below, these mechanisms leverage the synergy between three principles:

We are also using some variants of these algorithms as tools to model spontaneous exploration, curiosity and information seeking in humans, and how it can impact the structure of cognitive development, as detailed on this related page.

A good starting point for reading about our work in this area is the following list of articles:

Note: complementary information on this topic is also available on the FLOWERS INRIA team web site.

In statistical machine learning, we have elaborated active learning mechanisms with the goal to allow robots to learn efficiently novel sensorimotor skills in high-dimensional, non-linear, non-stationary and redundant spaces, and within severe time constraints. They are based on three key principles that can be combined: empirical evaluation of learning progress, goal babbling, and strategic learning.

Exploration driven by empirical estimation of learning progress: A first key principle we are studying is active learning of sensorimotor models driven by the maximization of empirically evaluated learning progress. This drives the learner to explore zones of its sensorimotor space where its predictions, or its competences, improve maximally fast in practice (as opposed to in theory). As a side effect, the learner first explores easy activities, then when they are learnt it automatically shifts to progressively more complex ones. In large and real-world spaces, where it is impossible to assume strong analytical properties of the relation between the learner and the environment, this was shown to be significantly more efficient than active learning approaches which maximize novelty, surprise or entropy (or their reduction if it is estimated in a model-based manner). Yet, estimating efficiently the empirical learning progress is highly challenging since it is a spatially and temporally non-stationary quantity. We have developed over the years a series of algorithms addressing this challenge, starting from IAC (Oudeyer et al., 2007), R-IAC (Baranes and Oudeyer, 2009), SAGG-RIAC (Baranes and Oudeyer, 2013), McSAGG-RIAC (Baranes and Oudeyer, 2011), SGIM-ACTS (Nguyen and Oudeyer, 2013), zeta-Rmax, zeta-BEB (Lopes et al., 2012), and SSB (Lopes and Oudeyer, 2012). For example, (Baranes and Oudeyer, 2009) presents the R-IAC architecture and shows how it allows efficient learning of hand-eye coordination in robots. In (Lopes et al., 2012), an RL formulation of this approach is compared to PAC-MDP approaches (e.g. R-Max) and Bayesian RL approaches (e.g. exploration bonuses), providing natural extensions that make them more robust in complex non-stationary spaces (zeta-R-Max and zeta-EB algorithms).

Autonomous and active goal babbling: A second key principle is goal babbling, also called goal exploration. A crucial need in robot learning is the acquisition of inverse models, where a robot has to efficiently learn a mapping between goal or task parameters and the parameters of motor controllers that reach these goals. In goal exploration (Oudeyer and Kaplan, 2007), the learner selects its own goals and self- explores and learns only sub-parts of the sensorimotor space that are sufficient reach these goals: this allows to leverage the redundancy of these spaces by building dense tubes of learning data only where it is necessary for control. The selection of goals can be made active, by sampling goals for which the empirical estimation of competence progress is maximal. This allows the robot learner to avoid spending too much time on unreachable or trivial goals, and progressively explore self-generated goals/tasks of increasing complexity. The SAGG-RIAC architecture (Baranes and Oudeyer, 2013; Baranes and Oudeyer, 2010) instantiates this approach and was shown to allow orders of magnitude speed-up for learning skills such as omnidirectional locomotion of quadruped robots and learning how to control a fishing rod with a flexible wire.

Indeed, for life-long learning of multiple tasks in real world robots, time, physical and cognitive resources are limited: learning requires that multiple kinds of choices be made by the learner or by its teacher. For example, one has to choose how to allocate time to the practice and learning of each task, to choose which data collection method to use (e.g. self-exploration versus imitation learning), and to choose which statistical inference method to use (e.g. using different kinds of representations and inference biases). These choices generate an ordered and structured learning trajectory, and this structure can have a major impact on both what is learned and how efficiently it is learned.

We have also experimented how Strategic Learning can be used to address a very important question in muti-task life-long robot learning (Nguyen and Oudeyer, 2013): how this can allow the robot learner to concurrently decide what task to learn at a given moment, when to do self-exploration and when to imitate for improving on this task, and in the latter case how to imitate (emulation vs. mimicry) and whom to imitate (from one of several available teachers).

The Playground Experiment. We have built an
experimental setup, called the Playground
Experiment, which allowed to show how the curiosity algorithm which we
developped allows for the self-organization of developmental trajectories
with sequences of behavioural stages of increasing complexity (Oudeyer et al., 2007, Oudeyer and Kaplan, 2006).

Learning omnidirectional quadruped locomotion.In this experiment, we showed how the successive architectures we developped allow a quadruped robot, initially equipped with parameterized motor primitives in the form of a 24 dimensional oscillator (sinuses with various parameters in most of the joints), learns to use these motor primitives to locomote precisely in all directions and in varied manners. In the article (Baranes and Oudeyer, 2013), we study extensively a physical simulation of this experimental setup with active learning algorithms.

The Interaction of Maturational Constraints and Intrinsic Motivations in Active Motor Development
Baranes, A., Oudeyer, P-Y. (2011)
in proceedings of the IEEE International Conference on Development and Learning (ICDL-Epirob) , Frankfurt, Germany. Bibtex